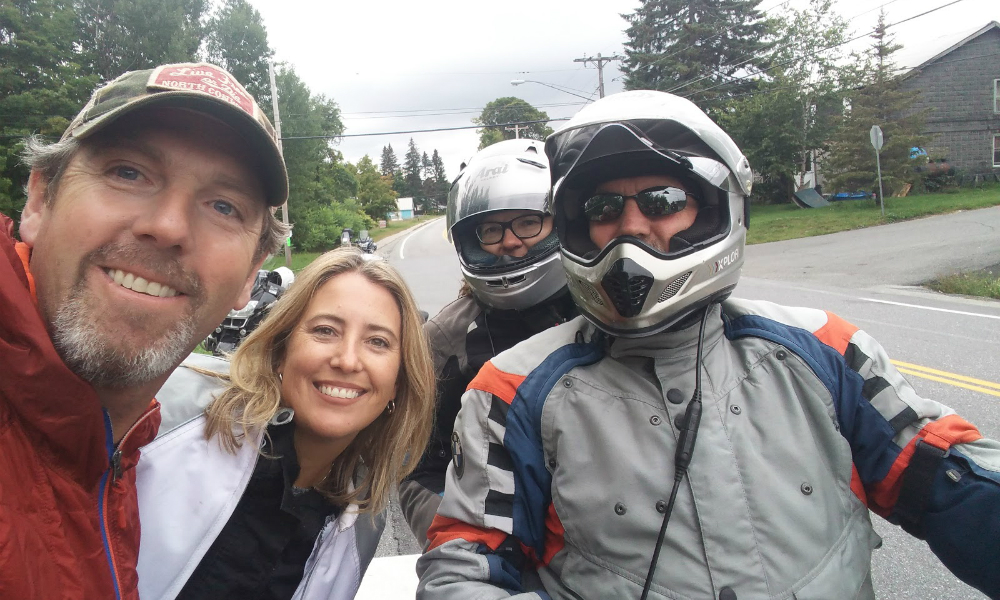 It was an abnormally large group.   At most we roll with 5 or 6. Saturday morning of the GMR (Green Mountain Rally) when I called kickstands up after serving coffee that punched you in the mouth with black sweetness we were 10 bikes and 2 pillions. Twelve riders. The Green Mountain Roasters ground espresso beans were called dark magic. Brent Powers pushed the plunger down on his 6 cup french press and we were in business. Friday night Bluegrass hangovers burned off like the mist that coated our seats and windshields.  I led the line out of the lower campground and instructed #2 rider: Iron John to stage on the shoulder of the exit road single file.  We were commed up in two groups of four with a couple of riders ready for a day of moto bliss without all the cheeky commentary. I collected Jim and Lisa riding 2 up on an R1200GS at the top of the Camp Thorpe pavilion parking lot and we were off. I led the group east on VT-73.  Now, facing the rising sun, we surged leaning forward to turn loose the big twins.  Joy, my 09 R1200RT set me back in the seat without hesitation, leaping into the first S turn sequence. The tempo of the day was set with a roar. 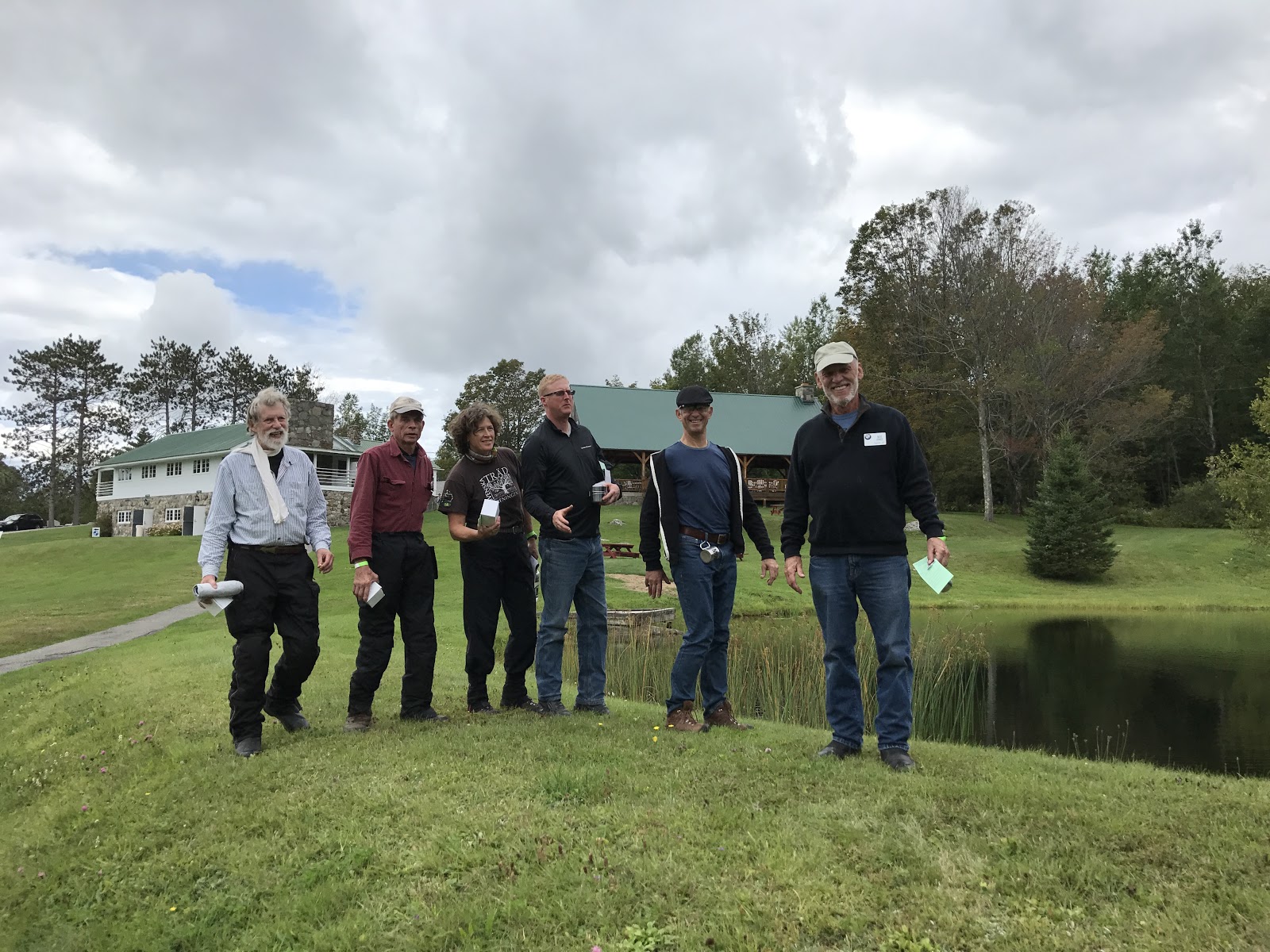 Left to right, Iron John, The Hermit, Sweet Melissa, The Director of Fun, Sandy “triple digits” Marincic and The Deacon

We turned left onto VT route 100 and headed northbound with the last group member making the turn. “All in” I heard on the communicator.

“Three Five” I called out.  “We have to behave here. The C-O-P-S  love this town” I said without saying the word.

Breakfast was real good and as it turned out we all fit on the porch. We had time enough for Bear to tighten her chain, something most of us did not have to mess with.

This was a tight pack. All but a few have been interviewed for my moto blog. Seven of us rode together just this spring. 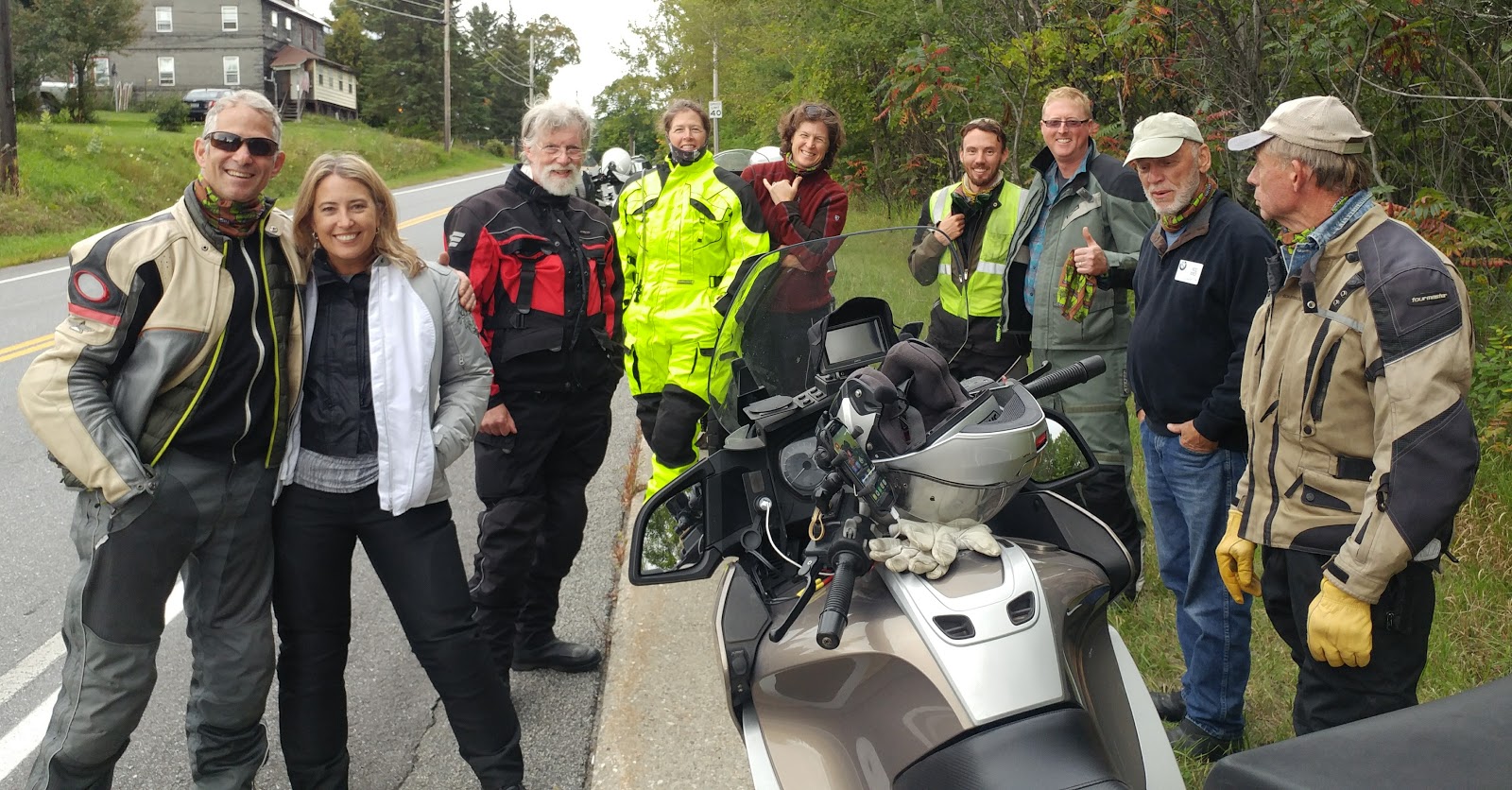 Now north on Route 100 we enjoyed new asphalt in full shade. Moss covered the rocks with waterfalls filling the roadside stream. Then in Hancock, VT125 West carved up over Middlebury Gap and dropped us now with the sun at our backs through the Robert Frost Breadloaf campus. We cleared Middlebury on 125 and pit stopped at Pratt’s store.  With the green mountains behind us we were headed into the lower Champlain valley. I rolled the group out of the store parking lot suspiciously slow, holding first gear and low idle, coasting down the rolling straight away. When the last rider was all in I crushed the throttle dropping the hammer on Joy. We all went as I listened to the chorus of big twins rolling on throttle in my sena speakers. I was surprised at how close to redline she got before I shifted 2, 3, 4, 5. I could feel the bottom of my feet burn as though I was on a wood floor in wool socks the hair stood on the back of my neck. A blue car appeared on the rise before me.  Out of the throttle, yellow plate: “New Yorker” I thought as I downshifted and rolled on for my own roller coaster. Iron John close behind was making his Triumph triple sing. We got ahead of the group near lake Champlain so I staged in a campground parking lot. Melissa had passed a runner that was in need of assistance. So we waited while she fed out water and an energy bar. She is always looking out for others on the road. 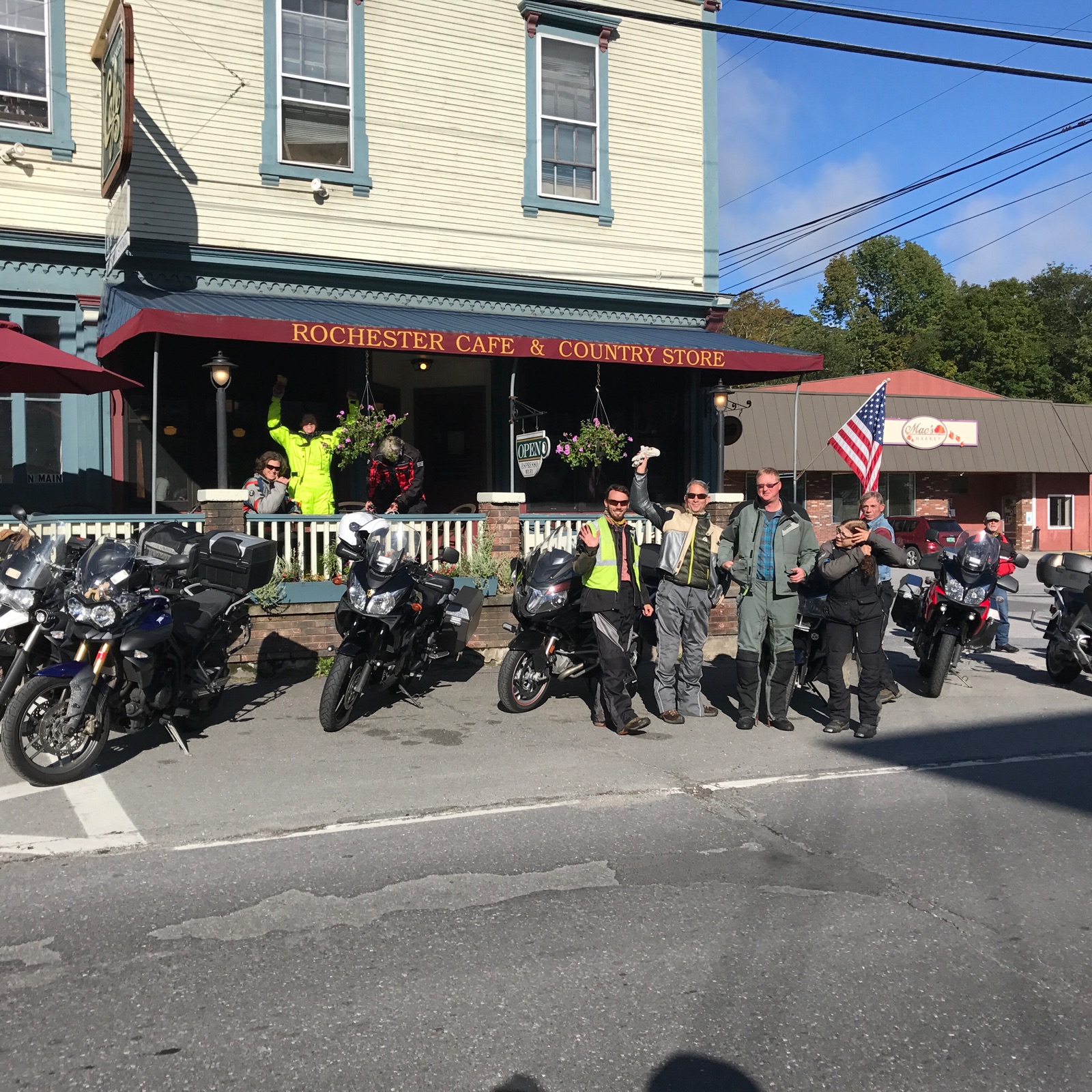 We crossed the Crown Point bridge and paced our self’s through the forgotten iron mine shipping town of Port Henry. We were unwilling to face a NY judge in “Kangaroo court”. I stumbled through reclaimed asphalt road construction that tasted like creosote from a wood stove to find Tracy road, one of Iron John’s favorites. Then just when we intersected it we realized something was wrong.  We were no longer all in. Jeff and Mary Lou Buell, our photo couple were sidelined with his 1993 K75S. It was just shy of 50,000 miles now with the last 15,000 being put on in a year and a half. It stalled while running and would not crank. Jeff located an autoparts store in E town that had his battery in stock. Jeff’s plan was to  abort the trip and return to the Brandon Motor Lodge for the night.  Jim and Lisa made the trip to get the battery as I called a group meeting. We decided to stay with Jeff until he was in motion and on his way back and only then continue on with our trip. The Hermit and Iron John took a minute to light up a smoke, chilling out after the chaos of a breakdown. It was good to stop and visit. While we stood curbside we gazed at a mining company row house with the roof caved in with rotting timbers and trees growing through the holes. Iron John proved his toughness diving for a frisbee on the asphalt standing up with a scrape on his hand. 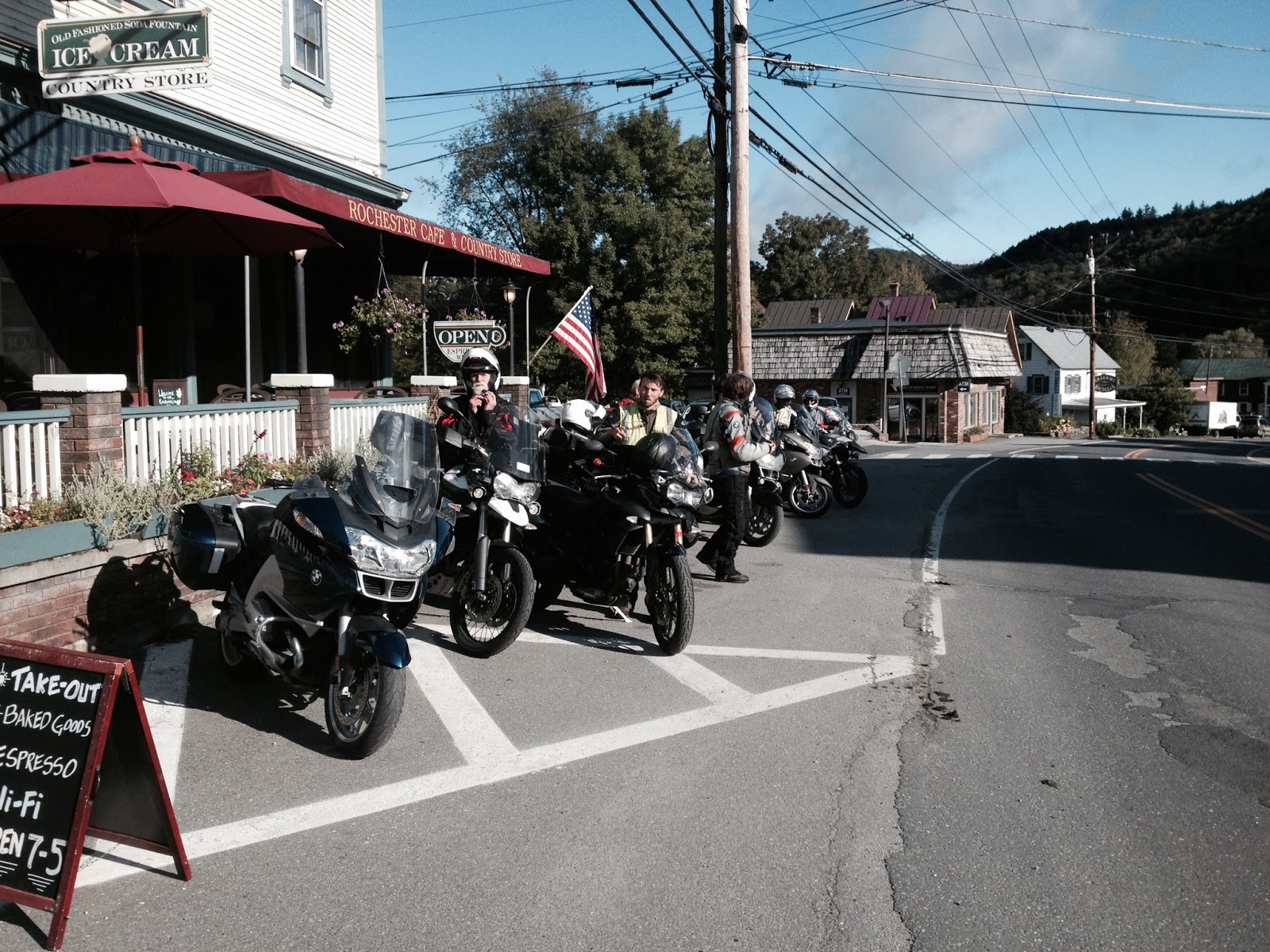 Back in motion less the Buells, I called out to the Hermit and Iron John that I had a low battery warning on my sena 20S. Before I got my whole sentence out Hermit exclaimed: “Oh Shxx, what is going on!” I replied calmly: “ David, it is just my headset,  my bike is fine why don’t you lead us to lunch”.  Tracy road delivered. I kissed the mirror a couple of times leaning into the corners not quite enough for Iron John who lit up the triple and surged passed me on the left. I followed only catching him when a car slowed his pace back down to comply with roadside signage. The brightness in Iron John’s eyes matched the smile on his face. Iron John will always be the lead bike of Rossier’s Raiders. His whistle is infectious in the morning mist singing in the heat that makes clouds give way like the captain of a fishing ship. 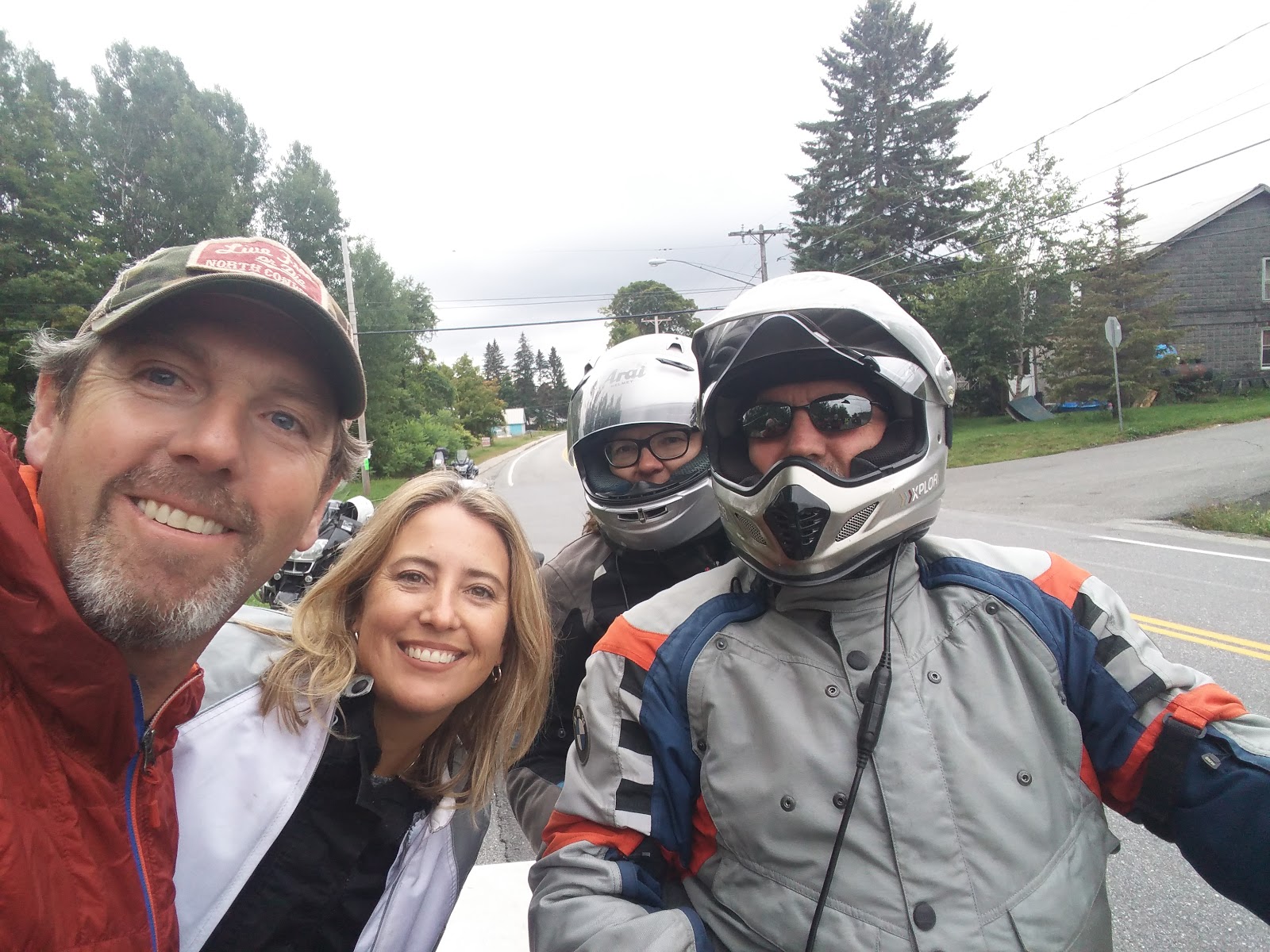 The Usual Suspects are named for an uncomfortable conversation with one of Maine’s finest in the spring of 2017. “I shouldn’t have to tell you old people to slow down” the junior officer shouted. “ I see that you are all experienced riders” he went on: “I can put all of you in jail tonight!” he exclaimed as our heads lowered at the end of each thought. 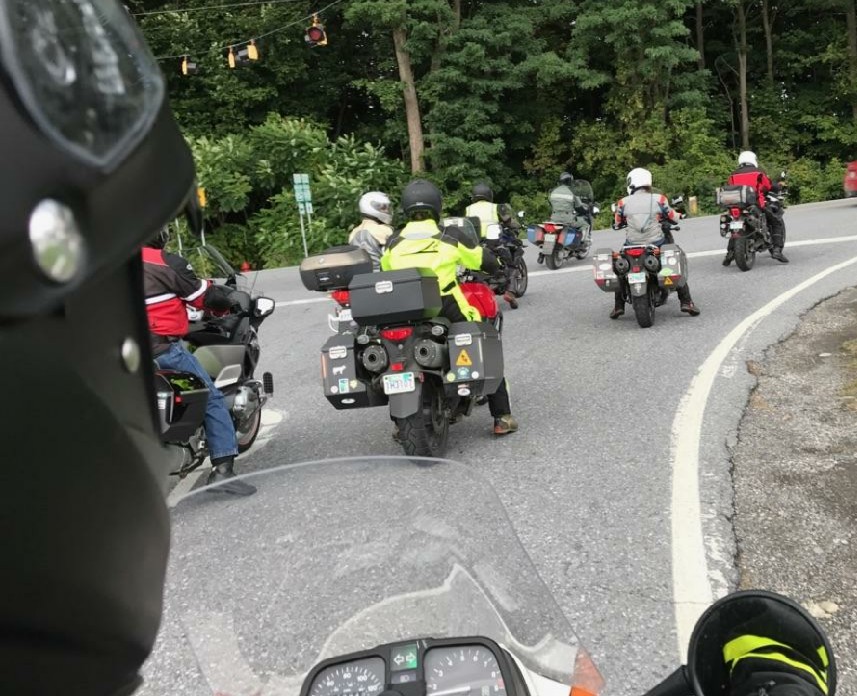 I snapped to attention, our route to Lake Placid, New York’s home of the 1980 winter olympics was taking us next to a beautiful lake dark with tannin from conifers, purple grey stone faces rose above slot lakes, shrouded in clouds that enveloped the ride. Moisture squeezed out of the air making contact with my face shield. The Hermit lead us through the Olympic village to a roadside barbecue joint.  The highlight of The Tail of the Pup were standing gas radiant heaters. They warmed the outdoor picnic table seats.  I pulled my hood over my head to keep from getting cooked.  The waitress resembled Leslie Mann.  “Honey, is the money on the table?” She asked.   “Yep,” I replied, pointing to the table.  “Thanks Babe” she said looking over her shoulder as she walked away. Jim took the lead out of the pup. Tempered by the rain the Raiders pushed forward headlong into light rain passing entrance roads to hunting lodges. I am not going to tell you where he led us, I am only going to say that we rode at least an hour before we landed on the road he named: The New York Blueridge.  The rain, mist and drizzle that had plagued us on and off through the afternoon disappeared. We peeled right off a two lane highway and onto another we carved and descended tree covered S turns that required little braking to negotiate. 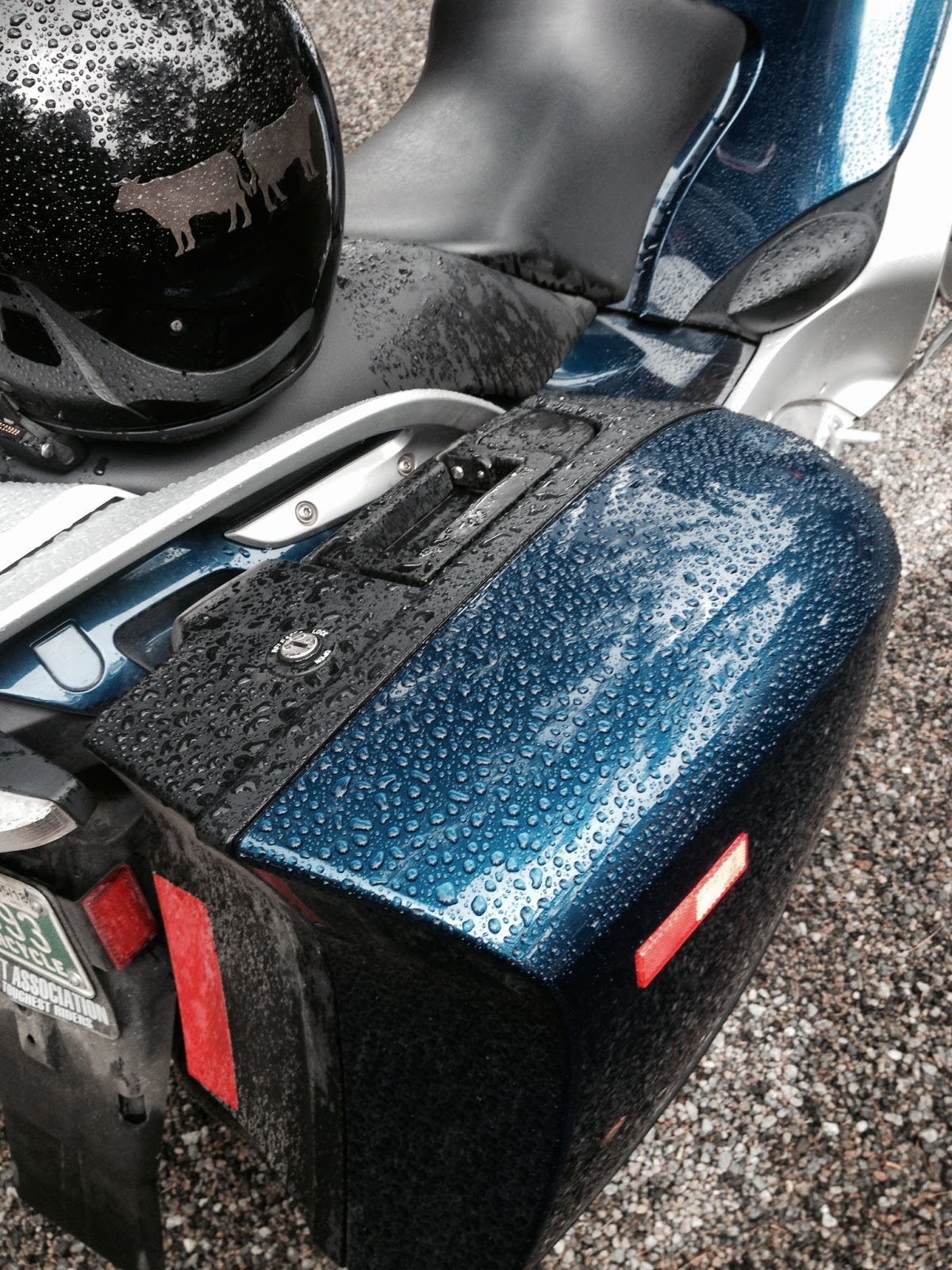 The turn off had us stacked up like we were waiting for a green flag. Somewhere it dropped and Jim began to disappear.  I was in the back third of the pack and had trouble staying with the riders in front of me.  This road was built by either an auto enthusiast or a motorcyclist that was also a highway planner.  The curves are perfect, each with a  constant rate of turn throughout, as though they were built to roll on throttle and roll on we did. Jim put the GS through its paces, seldom braking, while Lisa, his pillion carved up the road from her seat and at times while standing on the passenger pegs.  “It is still going” I said to myself, it just keeps going, shaking my head and smiling.  Hermit yells into the mic: “This is unbelievable”. “No, really” he continued. I noticed that I stepped away from the last two riders. They backed out of the throttle uncomfortable with the pace. Just not feeling it. Hot curves had me off of my seat, one side then the next, dropping my shoulder, leaning, carving not wanting it to end able to taste the moto bliss. A right turn marked the end of the 18 mile stretch. Most of us made the turn, the Hermit blew past it and was forced to negotiate a U-turn on asphalt.  With all the excitement he ended up putting his bike down at walking speed in the grass. “Oh my God”  he said ” That Melissa is strong”.  Sweet Melissa bent down and picked up his black 09 R1200RT and reversed it up onto the paved road with little effort. Rattled, and shaken the Hermit’s heavy breath into the mic told me he was in need of a break.  The intersection we were in was blind from both directions.  Up the road Jim stopped and we took a minute to let the Hermit’s cortisol level come down with another smoke. I began to reflect on gratitude.  “How did we get this lucky” I thought.  To have this road, with these friends on two wheels. Jim let the lead to Hermit just over the Champlain bridge, putting us back in Vermont.  Route 125 East to Route 22A south. “I am not going all the way to Orwell to pick up 73” Hermit said on the comms.  He chose to take us on the Richville Dam road back towards Brandon and onto the rally for dinner. A narrow two lane without a yellow line that carves its way back past the farms and fields of the lower valley. The clouds cleared and the sun set on the Adirondack Mountains we just left, it’s orange red glow surrounded us and matched our insides.  “Hermit put gold in the hand of every rider with this road” I said over the comms. The Richville Dam road was like a fine dessert after a seven course sit down meal. Ten hours after our hot cup of black magic we were kickstands down at the rally each of us grinning, wondering what just happened, wondering if it would ever happen again, just happy that we were all there for it. As we sorted our gear and prepared for the evening festivities pieces of broken shackles could be seen lying at our feet. The moto beasts had been unleashed in the ADK. In the rally washroom I described the days events to my friend Paul with Jim just out of sight, but not earshot. He corrected my story: “I never went over 65 on that road”.   “What are you talking about you guys were gone” I replied.   “I just didn’t slow down for the corners” Jim said with a spark in his eye and a grin half appearing from under his mustache. 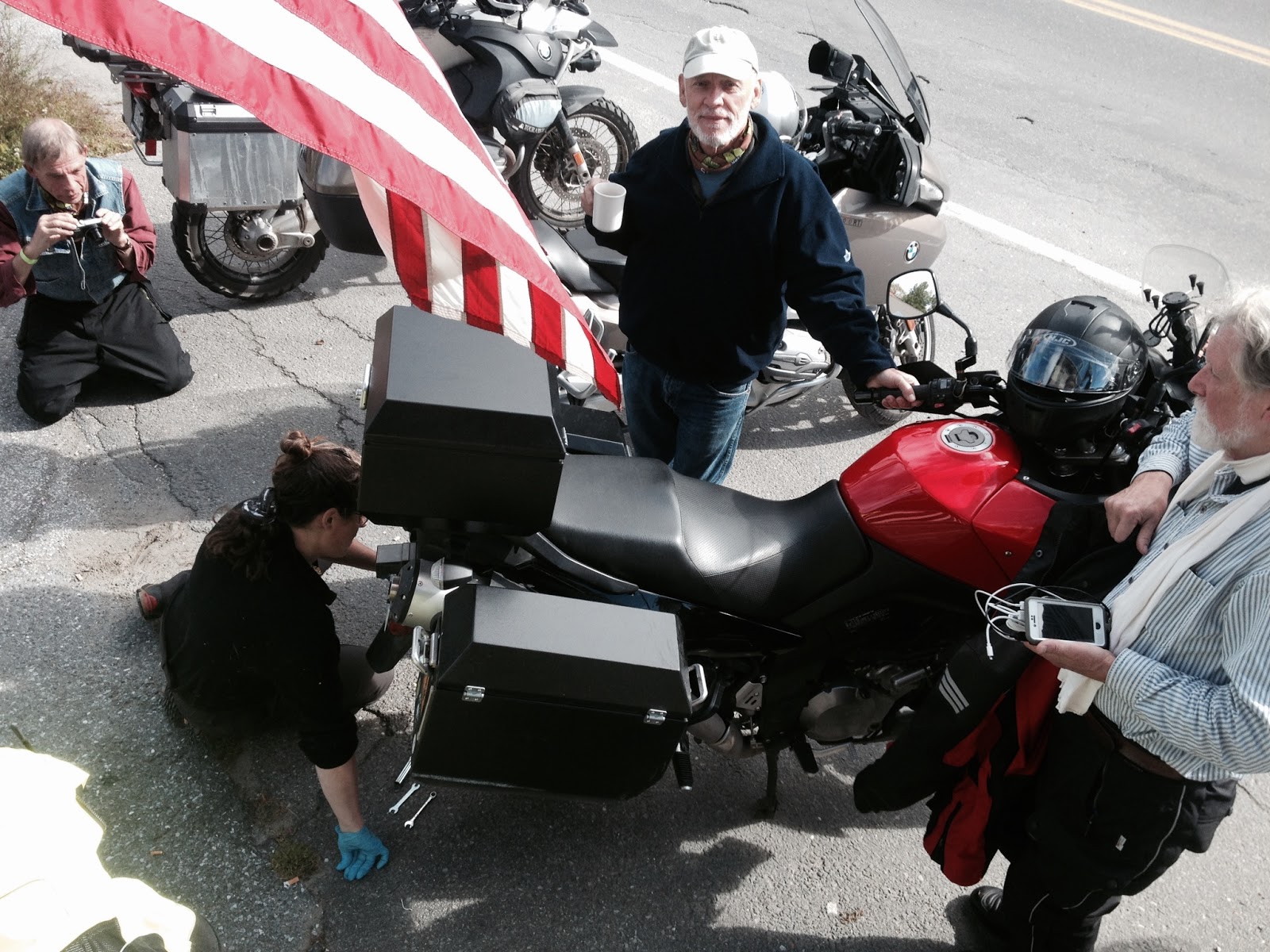 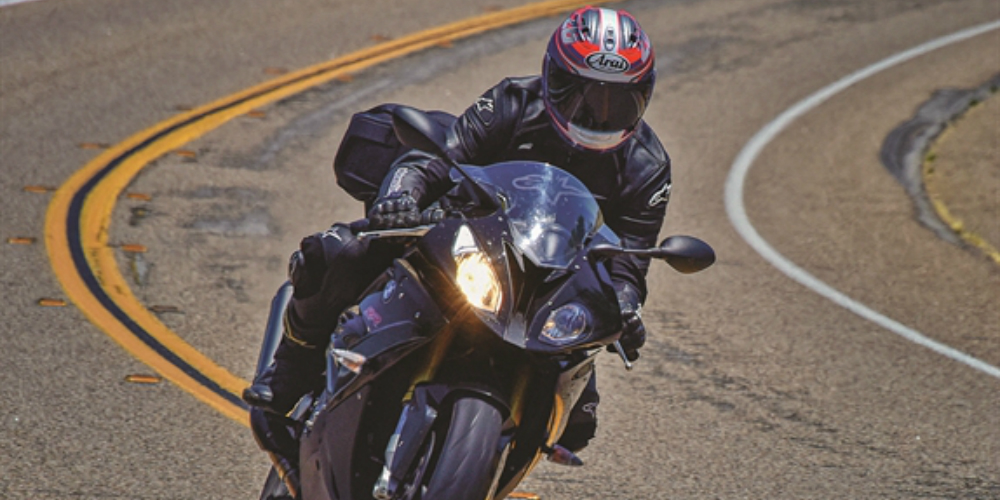 Sport Touring on an RR